Orchard is waking up 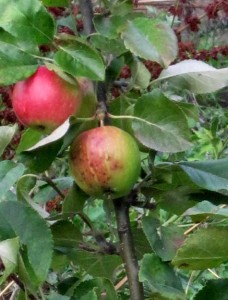 Greetings from the Orchard. This is an update on the orch­ard going  to all those who have been along to help since the first shovel of earth was dug in 2009. We had our first work­day of 2012 on the last Saturday in February 2012. It was warm, the cro­cuses were out and the bees were ven­tur­ing out from the hive.

We were able to start put­ting up the wires for the fruit trees against the large stone wall. Nearly fin­ished the wooden fur­niture. We build anoth­er sec­tion of the dry stone wall and checked all the labels on the fruit trees. Sadly we also cut down the old apple tree which died last sea­son. We also drank tea and cof­fee and ate bis­cuits and looked at what we all achieved last year.

Here are some of the things that happened at the orch­ard in 2011.

We were able to to as much as we did because of money from the Climate Challenge Fund to pay for trees etc. We also had paid work­ers but sadly they fin­ished in early spring. We have used up the grant money for trees & tools but a great deal has been achieved.  Most import­ant has been the volun­teers and vis­it­ors. It is the com­munity who make hap­pen with the help from moth­er nature. So thanks to all who helped in 2011.  We are look­ing for­ward to the year ahead and please come and join in whatever way you can.

Our first job on our next Workday  Saturday 31st March will be to put up the sup­ports for the apple tun­nel and plant the trees. Further workdays:

This entry was posted in events, Food, gardening, Orchards. Bookmark the permalink.

One response to “Orchard is waking up”

This site uses Akismet to reduce spam. Learn how your comment data is processed.